Can anyone really cook?

“Anyone can cook” said Chef Gusteau in Disney’s Ratatouille, and for some reason I remembered that line. I realized later that it was quite a controversial statement from a traditional French chef, who tends to believe that cooking is an art – something that requires years of experience in complicated techniques and knowledge about food.

Most of the cookbooks on my bookshelves at home are French. The recipes are usually 2-3 pages long and everyone knows that it takes a few (or in fact many) attempts to cook a proper sauce béarnaise or perfectly flaky croissants. 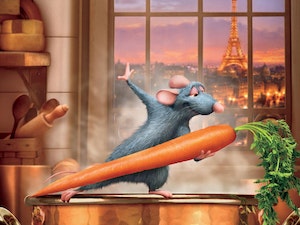 6 years ago, I started a food blog and since then everything about cooking and food has been like an obsession to me, so you can imagine how many hours I spend in my kitchen the last years. I have been and am still very fascinated about cooking in the way the French people refer to it: as an art – something complex and magical at the same time.

This summer when I met Michael, we were brainstorming around the concept of making a cooking app that enabled people to pair ingredients based on their aromas. I was completely in love with the idea – for a food geek like me it would be a tool to explore surprising pairings, enlarging my cooking repertoire. But for Michael it was something else.

Very soon he started to do what he does best: structure things! For me it felt almost claustrophobic to think and talk about cooking as structured procedures.

Later that day, I found myself in my kitchen cooking a risotto. I didn’t need a recipe; I’ve been cooking risotto for many years. And then I realized that structuring cooking was not necessarily claustrophobic – actually completely the opposite. The reason I didn’t need a recipe was because I had memorized the basic steps of a classic risotto recipe and from that I could improvise by mixing and matching different ingredients to vary the dish.

Next day I talked to Michael again and I remember saying to him: “But then I guess we’re going to reveal the secrets of cooking…” – he laughed at me and at that moment I understood that Chef Gusteau was right. So I went home and googled the cheesy Disney quote from Ratatouille: “Anyone can cook but only the fearless can be great”.